We had a visitor in the garden yesterday. The black squirrel is relatively common in this part of Hertfordshire but it's the first year they have started coming into the garden. I took the shot through the conservatory window which is in need of a bit of a clean, hence the 'smoky' smear. The light was very dim and I didn't have time to change to the big lense on my camera. This is a cropped version of the original.
Click through for larger image. 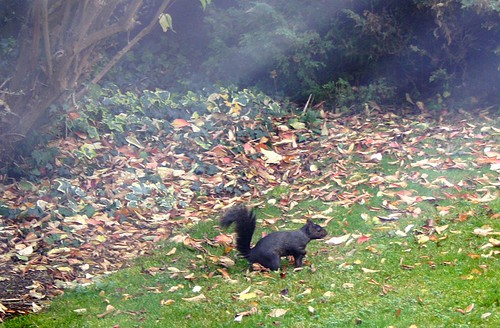 The first black squirrel reported in neighbouring Letchworth was on Norton Common in 1944. The first pub selling alcohol in the town (and the only one until the Town Elders changed the local regulations a few years' ago) was The Black Squirrel (now re-named The Globe)

Black squirrels look smaller than greys, are as long, but less stocky, and with a skinny tail. Genetically they are melanic (dark pigmented) grey squirrels and can inter breed with greys. Melanic grey squirrels were introduced to Woburn Park (Bedfordshire) from the U.S. at the end of the 19th Century. Letchworth has one of the largest colonies in the United Kingdom.

Off for another pot of tea and another chapter of Good Omens, the audiobook - for which many warm thanks to the very generous and thoughtful