I took my Sis-in-Law, Nuala, to Red Hat T@3 on Saturday. She was pleasantly surprised that it was so enjoyable and relieved to find that not everyone was a Mad Hatter. 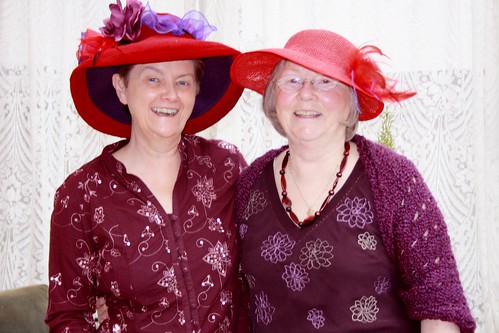 Nuala borrowed some purple clothes and my second-best hat. She looked fabulous and is wondering where the nearest Red Hat Chapter is in Bavaria.

It never ceases to amaze me just how much donning Red Hat regalia really puts a person in the mood for the 3 Fs - friendship, fun, frivolity. 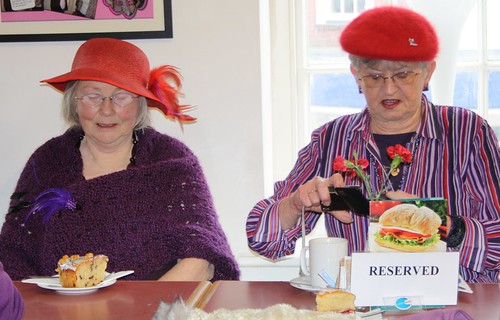 There was a smaller number of Red Hatters attending the event than is usual but a pleasant time was had over coffee and rather large slices of cake.

There were two new recruits plus the 'Feather and Tar' ceremony (where the Chapter Queen formally gives the member her Red Hat name using a red feather, to which the member replies 'Ta') for a couple of members who'd had missed the last one. Nuala was given a Red Hat mug with the name of the chapter 'My Fair Ladies' on it. It was such a nice, relaxing event to round off her week of cat-sitting in London for The Daughter.
Collapse